BBC pundit Micah Richards has revealed that Emmanuel Adebayor came close to signing for Aston Villa in 2015 before he had a change of heart. The former Aston Villa, Fiorentina and Manchester City utility player said that Tim Sherwood was keen on signing Emmanuel Adebayor while he was the Villa manager. 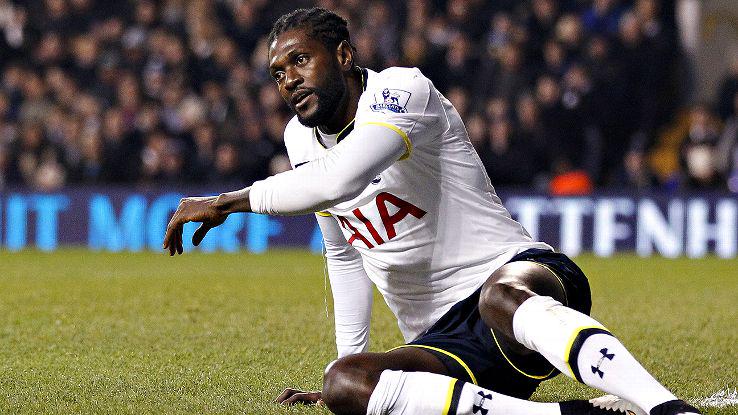 Emmanuel Adebayor impressed during his loan spell at Tottenham Hotspur during the 2011/12 season under the guidance of manager Harry Redknapp and that prompted the North London club to sign him permanently. Adebayor initially joined Spurs on loan from Manchester City before the move was made permanent in 2012. He became surplus to requirements when Spurs signed Spanish attacker Roberto Soldado in 2014 while Andre Villas-Boas was the Tottenham Hotspur manager. Adebayor had a mini-revival at Spurs when Sherwood was made the interim manager at Spurs and he wanted to take him to Villa Park when he was appointed the Aston Villa boss.

Tim Sherwood and Villa wanted to sign Adebayor and they thought they had the transfer in the bag before the striker changed his mind about moving to Villa Park as revealed by Micah Richards while he was on BBC Sports recently. At the time, Adebayor had been frozen out of the Tottenham Hotspur squad after Mauricio Pochettino was made the Tottenham Hotspur manager.

Speaking on the BBC Match of the Day Top 10 podcast last week Monday, Richards said that Emmanuel Adebayor came to Villa and he had already signed ahead of an official announcement. He further said that Villa thought they had signed him as he had already posed in a Villa shirt. Sherwood was certain that he would get the best out of Adebayor at Villa only for the player to change his mind abruptly. Apart from Spurs and Manchester City, Adebayor played for Arsenal and Crystal Palace in the Premier League.