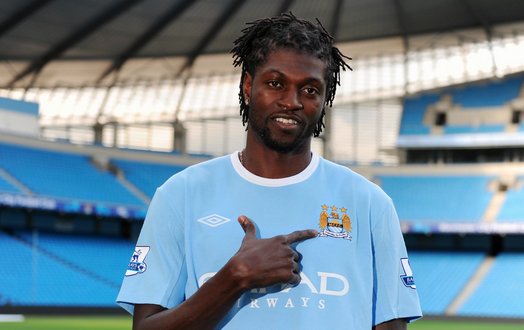 Emmanuel Adebayor scored on his Manchester City debut. It took him just three minutes to open his account for his new club against Blackburn Rovers. The Togolese international also scored on his home debut against Wolverhampton Wanderers off the assist from Carlos Tevez. Adebayor scored the only goal of the game in a 1-0 win over the visitors.


Adebayor scored for a third game running at the start of his Manchester City career, netting the winning goal in the 1-0 away win over Portsmouth at Fratton Park. He took his run to four games in his first season for the Citizens after netting in the 4-2 home win over Arsenal thus making him one of six players to score in the first four matches for their new club in the Premier League.

Emmanuel Adebayor was booked for running the whole length of the pitch after scoring against former club Arsenal in just his fourth game for Manchester City. He was also banned for three games for violent conduct as he kicked former Arsenal teammate Robin Van Persie in the face during the same game.

Manchester City gave him a new number (9) at the start of his second season as he moved from the jersey number 25 worn at Arsenal and in his first season at the Etihad Stadium. Adebayor became the first Manchester City player to score a hattrick in an European competition after he scored it in the UEFA Europa League match against Czech Republic outfit Lech Poznan in the group stage on October 21, 2010. He was sent on loan to Real Madrid during the second half of that season before signing for North London team Tottenham Hotspur permanently in 2012 after a successful one year loan. He was sent on loan to Spurs from Manchester City for the entire duration of the 2011/12 campaign.